In his speech, Alwi Hassan, Resident Director of International University of East Africa said that the signing ceremony was held at a time when Zhengzhou Railway Vocational and Technical College was celebrating its 70th anniversary, and that he felt it was a great honor for him to have the opportunity to cooperate with our college at this historic moment. He hoped that our college would write more brilliant chapters in the future. Founded in 2010, International University of East Africa is a top private university in Uganda whose mission is to pursue excellence, impart knowledge and train qualified graduates. It is certified by Uganda National Higher Education Commission, and students from more than 42 countries are now studying in the University. Alwi Hassan hoped that through cooperation, the two sides would create an international platform for academic education and non-academic education, and strengthen exchanges, mutual visits, academic discussions, and the training of young teachers.

Vice-President Dong Lisheng said in his speech that the cooperation between the two sides would improve their international education level, contribute to the training of high-level technical talents, and promote the economic and social development of Uganda and East Africa. He said that under the vision of common development, our college will actively carry out in-depth and pragmatic cooperation with East Africa International University, and through the joint efforts of all parties, strive to build China-Uganda Zhan Tianyou Institute into a landmark project for China-Africa vocational education cooperation.

Under the witness of the guests present, Dong Lisheng and Alwi Hassan signed the co-construction agreement on behalf of the two sides respectively. 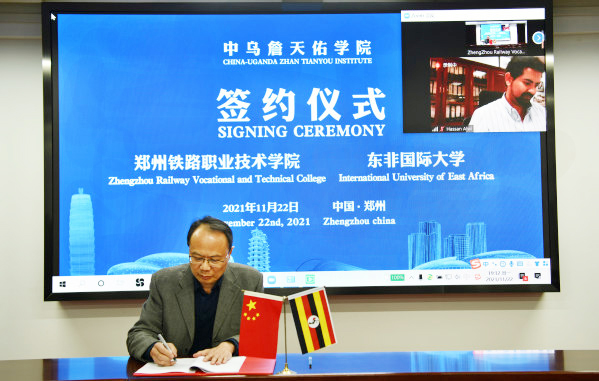 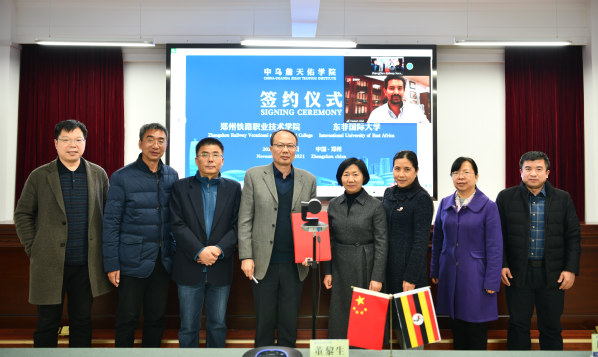 The signing ceremony has laid a solid foundation for the continuous and close cooperation between the two sides, expanded the scope and depth of international exchanges and cooperation of our college, boosted our college’s contribution to the high-quality development of the BRI and the Going Global strategy for China’s vocational education. It has also promoted the opening-up of education in Henan Province, and contributed the China Program for the development of international vocational education.